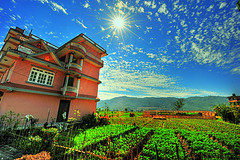 gChem is a growing collection of Google Spreadsheet functions for chemistry. Andrew Lang has recently added a number of new functions to gChem enabling both predicted and calculated properties to easily be used through a familiar, web-enabled spreadsheet interface.

gChem can already be used to build fairly complex chemistry workflows by users without any special training. The key is Google Spreadsheets' ability to consume Web APIs through a user-friendly interface. As more open chemistry web services are made available, they can easily be include within gChem.